Get matched with thousands of Christian singles — for FREE 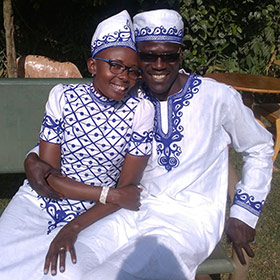 I have always been skeptical about Online Dating Sites. In my view, one may end up meeting a hoax of a spouse!

After much convincing from a friend, I checked out a few sites. I wanted a Christian dating site that upheld Godly values. So I googled 'Christian Dating Sites' — and landed on cMatch.

I signed up for cMatch in 2013, and had a few winks and men who had read my profile, but I was still skeptical. After a year in cMatch I decided technology was not an avenue where I would meet a prospective husband. I was convinced more than ever online dating services did not work!

Before I decided to leave the site (after being disappointed that 101 men had read my profile and none had shown interest), I chose to make a few adjustments on my profile and be real with myself — calling a spade a spade! I remember telling God, the man who would read my updated profile and truly felt they could handle a woman of my calibre, I would give him a chance. I then put time off on my profile and moved on with my life.

Towards the end of 2014, I received a wink. By then I had completely forgotten all about cMatch. It was the first week of September 2014. I read the profile of this man, I felt he was 'too' spiritual and wondered how he dealt with reality! I did not pay much attention at first nor did I respond to his wink immediately. Then I remembered my promise to God — to give a chance to the man who showed interest. So after a few weeks, I responded to his wink; I was very diplomatic (not expecting anything to materialize).

Months before September 2014, I was engaged in prayers for my future marriage with the help of a friend. In my prayer journal I had asked God to open the doors towards my marriage.

Curiosity took over and I asked lots of questions because he was a widower. He answered my questions satisfactorily and with such openness. This motivated me to give him a chance. We continued exchanging e-mails and met for the first time by the end of September 2014. Our first meeting proved that we were meant to be. We got married on 14th August 2015. God works in mysterious ways! Who knew I would meet my husband online!